Waking in an abbey, Nimue finds herself surrounded by strangers and forced to tend to Red Paladins. Arthur sets out on an adventure of his own. 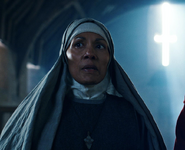