"The Callieach told me who would be the greatest sorceress in Brittania. And it is not the Wolf-Blood Witch. It's you, Morgana." ― Celia to Morgana[source]

Celia is a side character who is a nun at the same convent as Arthur's sister, Morgana.

Celia is a nun. Little is known about her background, including how she came to the abbey and how her relationship with Morgana began.

After her death she became an agent of the Cailleach and tricked Morgana into ingesting a spider, telling her that she was destined to be the most powerful sorceress in the land under the guidance of the Cailleach.

Although little is known about her character, she is portrayed as a kind and helpful person. She doesn't think of herself as brave.

She was in a romantic relationship with fellow nun Morgana, as they were shown kissing twice. However, the details of their relationship were not elaborated upon. Their relationship ended when Morgana left the convent and Celia chose to stay behind. After Celia is killed, she tries to encourage Morgana to take the Sword of Power for herself because it is not destined for Nimue or Arthur. 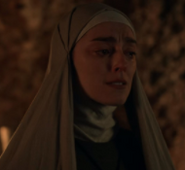