Shaken and alone, Nimue presses ahead on her quest, as flashbacks reveal a harrowing encounter years ago that changed the course of her life.

Having fought off a large group of wolves, Nimue experiences a flashback of her life as a young girl and playing hide-and-seek with her friend, Pym. As the chases after a Red Paladin, she recalls being confronted by a bear and calling upon the power of the Hidden to fend it off, based her mother Lenore's advice. She then uses the power of the Hidden to bind the paladin in plants.

King Uther Pendragon confronts Merlin, who tells him that he needs more time to "study the omens." When Merlin locks his door against King Uther, Uther orders his men to break the door down, wanting answers, but Merlin slips away. Meanwhile, Father Carden and The Weeping Monk discover the remains of Nimue's carnage and designate her the "Wolf-Blood Witch." Father Carden orders that word of Nimue be spread so that she will find no safe harbor.

Nimue takes rest at a pond and recalls more of her past and how she was attacked by a demonic creature. Her fellow villagers wished to forsake her, but her mother stood by her. She pleaded with her husband, Jonah, to help in his role as healer, but he was reluctant. Nimue sobs, recalling the memory, and considers the Sword of Power. Elsewhere, a young boy from Nimue's village, Squirrel, is captured by the Weeping Monk. He demands answers from Squirrel, but when Squirrel refuses, he takes him away. Nimue continues her travels and sneaks into a village, Gramaire. There, she learns that there is a bounty on her and it is said that any who help her are to be burned as heretics. She flashes back to her past again, recalling how she continued to face the scorn of her fellow villagers. She tried to run away, telling her mother that she was the girl that nobody would play with.

A group of Fey in the woods discovers the Weeping Monk and Squirrel. Stunned that the Monk would capture such a young boy, the contemplate what to do with the Monk. The Monk, however, reveals that Squirrel was simply bait to draw them out. He then slaughters the lot and tells Squirrel to tell anyone he encounters what he saw there. Back in Gramaire, Nimue is surprised and pleased to reunite with Arthur. She tells him about the destruction of her village. A man named Bors then appears and tries to take her away, but she attacks with the Sword of Power and cuts off his hand, warning she'll take the other if he tries again. Arthur then spirits her away on his horse. He warns her that Bors and the Red Paladins will not forget. The two sit and talk, relaxing, but she refuses when he tries to examine her scars. She has another flashback of her past in which her fellow villagers attacked her, saying she had "the mark of the dark gods." She used the power of the Hidden to fend them off, but this only made them even more scared of her. Her mother told her that when she was five, she faced a Dark God alone in the Iron Wood. She caught a fever which killed many, but survived. She is a warrior.

Back in the present, Nimue considers the Sword of Power. At her allowance, Arthur demonstrates some moves with it, telling her it's the kind of blade that gets you noticed. He suggests she could get 50 gold for the sword, which would get her a ship that could take her far away. Nimue tells him that her mother told her to take it to Merlin, asking if he thinks she meant the magician Merlin. He tells her she shouldn't give it to a stranger, but she says it was Lenore's dying wish. The two argue a bit over it, but when she says she's going to keep her promise, he agrees they'll ride together again, to a place where Bors won't find them.

Merlin arrives at Nimue's village and discovers Lenore's dead body. He takes it away and lays it to rest. Meanwhile, Arthur takes Nimue to a convent, Yvoire Abbey, telling her they're safe and with friends. Merlin, angered, knocks down several of the crosses erected by the Red Paladins in the remains of the village. He then confronts a spectral figure called "The Widow," asking if she's finally come for him after all this time. She says that he lied to him about the Sword of the First Kings being destroyed, but he tells her that it was what he was led to believe. She warns him that the Shadow Lords will see it as a final betrayal. She warns they will hunt him down, but he says to let them come. She warns him that the Church cannot acquire the Sword of Power. She tells him to finish the war he started. In the dead of night, Arthur takes away the sword from Nimue, as Merlin continues his chat with the Widow. He asks her several favors. Back at the Abbey, Arthur speaks with Igraine, telling her he is off to fulfill a dying wish. He rides away, the sword on his back. 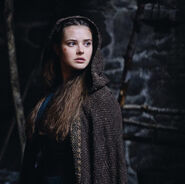