With Red Paladins closing in on the Fey hideout, Nimue hatches a bold plan to buy time and secure an escape for her people.

In a forest, the Weeping Monk discovers blood on several leaves and orders word to be sent to Father Carden that he's found the Fey camp. Nimue meets with a woman named Druna, a friend of Arthur's who reveals she has ships that can arrive in six days and take the Fey to safety. Gawain is wary of the idea, noting there are many who aren't with them, but Nimue decides to go for it, as she's their leader now and has to save as many as they can. Unfortunately, with the Red Paladins approaching, they find themselves boxed in. She therefore decides she will use herself as a distraction so that they can take Gramaire, allowing themselves a place of refuge until the ships can arrive.

Meanwhile, a woman named Eydis declares King Uther Pendragon to be a fraud and a liar. She orders that Cacher's word should be spread of the rot that rules from on high. Merlin walks with Cumber the Ice King, saying that things are going well with Cacher's word being spread. He asks Cumber that Nimue be spared. Cumber agrees to it, but then reveals to Merlin that he has allied himself with the Red Paladins. Meanwhile, Uther rages at Lady Lunete. Lady Lunete tells him she was meant to rule as a Queen, but it couldn't happen in this pathetic world of men with their antiquated rules. She says that she was relegated to make him king, but failed in that. She then reveals that she is not his real mother, saying her true son would have been made of finer steel. She tells him she will always been Queen Mother. Back at the paladin camp, Father Carden deals with Cumber and Merlin. Merlin says that he recognizes Carden's accent as being from Dunrow, which isn't exactly known for its bishops. He says that he saw an exit from his nothing town, but he couldn't buy his way into power, so he formed the Red Paladins. Carden offers Cumber the power of the Church, saying that the Lord's fire will purge the last remaining Fey in the morning.

However, the Fey's assault on Gramaire is successful. Nimue proves a great distraction, even as Nemos is being torched. Fey archers occupy the ramparts and the Red Paladins are driven out of the city. Nimue is left badly drained, but recovers after some rest and is pleased to reunite with her friend Pym, who has arrived with the forces of the Red Spear. Meanwhile, Arthur meets with his aunt, Marion and his uncle, Lord Ector. He tells them that Gramaire is free, but Lord Ector is angry, saying that he has declared war on the Church. Lord Ector tells him that he can tell "this Fey Queen" that he will speak with her, but he has nothing more to say to him.

Pym introduces Nimue to those that she has met in the Red Spear's forces, including her boyfriend, Dof. Dof is badly wounded and Pym asks Nimue to heal him, but Nimue is unable to. Before dying, Dof tries to give Pym his charm, "Sigurd," but she tells him that he needs it more than her. Then, after Dof dies, Pym tries to give the charm to his compatriot, Commander Vallus, but he comments that Dof would brain him Valhalla if he took it. Despite Nimue's failure, he thanks her for giving his people their freedom and tells her that she's earned the thanks of the Red Spear. In a nearby room, Morgana has a strange encounter with the Widow.

King Uther, Lady Lunete and Father Carden have a meeting, saying that they have a mutual problem. Eydis, meanwhile, reveals Nimue's capture of Gramaire to Cumber the Ice King. She tells him that Nimue cannot be welcomed and that the Sword of Power must be wielded by him alone. Back in Gramaire, Nimue meets with Lord Ector. He speaks to her acidly, and things end with him being forcibly removed and her taking his throne. He tells her to enjoy her brief reign. She then takes a council in which she learns that a convoy of refugees have gone missing. Gawain asks Nimue for permission to investigate and Squirrel asks to accompany him, which Gawain agrees to, having been impressed by his courage. Nimue then talks with Arthur, but the conversation does not go well, as he implies that she is letting the corruption of the sword get to her.

Merlin talks with the Widow, who tells him "a name has been given." When he asks whose, she lifts her cape to show herself in the form of Nimue. He is shocked, saying Nimue couldn't be seen by her visions, but she tells it's no vision. She says that she is unable to refuse the summons and that Nimue's fate is fixed. Merlin then goes to Cumber, asking if Nimue will be safe there, but Cumber tells him only as a guest in his dungeons. He tells Cumber that he offers his dungeons to Nimue as thanks for bringing him the midwife and he would do well to accept them. Merlin leaves angrily.

Gawain travels out into the woods and discovers the remains of the terrible slaughter of the caravan by the Red Paladins and the Weeping Monk. The Monk then appears and fights Gawain to the ground. He takes him away, telling him "They want you alive." Squirrel watches from a distance. In her chamber, Nimue considers the sword and seems to hear voices from it. Arthur returns and she asks if he thinks the Red Paladins have ghosts, saying that she hears them. They then argue again, Nimue reluctant about using the ships which Arthur offered through Druna. She tells him that she wants to stay and slay every Red Paladin from there to Rome if she has to. She asks if it's her talking or the sword, saying he can't tell anymore. The sword can survive the next battle, but they can't. He says that he's staying with her no matter what and she apologizes, saying she's not feeling herself. She asks him to secure the ships, but a man enters, saying that there are no ships. "This was thrown over the walls," he tells her, revealing a severed head. Outside, a large contingent of Red Paladins approaches Gramaire. 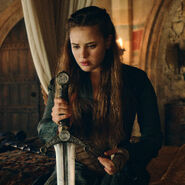