With the future of the Fey hanging in the balance and enemies closing in from all sides, Nimue sets in motion the final pieces of her plan.

In a dark room, Sister Iris nocks an arrow into a bow and claims a sword. She burns the body of a Faun archer and then walks away. In Nimue's chambers, Nimue and Arthur awake following their coupling the night before. Nimue tells him that it was different to what she thought and he asks if it was a "good different." The two continue to chat teasingly for a while, before the conversation turns to more serious matters. Arthur tells Nimue that her people don't trust him like they do Gawain. Outside, screams come of fire. They discover the man that Iris burned. Cora claims that it is Wroth and his blood vow and says that her people demand justice. Arthur agrees to deal with Wroth. Meanwhile, Iris continues her reign of secret killing throughout the camp.

Nimue meets with Merlin, who tries one last time to stop her from sacrificing herself. Saying that he fears his presence endangers her agreement with King Uther, he offers to sate Uther's thirst for revenge by offering himself up, telling her that he can send word back if he senses betrayal in Uther. She is reluctant of the idea, saying that they haven't had any time together as father and daughter, but he tells her to never wish for more time, that the gods might hear and grant the wish. She realizes that she can't sway him, just as he could never sway her, and they are alike.

Arthur speaks with Wroth, convincing him to sate his blood oath. He tells him that if he saves his people, his grandchildren will tell stories of Wroth the Just and Wroth the Wise. He tells Wroth that if blood pays for blood, to take his own. Elsewhere, Morgana meets with a cloaked figure, who tells her that she has been touched by the Callieach. It is the Widow. The Widow tells her that she has been cursed by Dark Gods, but she can help. She warns Morgana to not question her and to make no effort to interfere with her activities, or she will see her face again. She then spectrally chokes Morgana before disappearing and Nimue enters the room. Morgana tells Nimue that she doesn't belong with them, that she's not one of them. Nimue asks if she still wants to fight and gives her a special task. She hands her the Sword of Power and has her flee with it into a hidden passage. She then meets with Arthur, who tells her that he worked things out with Wroth and the Tusks. She admits that her hands are shaking about what she has to do. She asks him to promise that he will stay and help her people and he does so. They reminisce about the first time they met and share a kiss.

Nimue prepares to leave the camp, having a tearful goodbye with Pym. She walks away, sharing with villagers the Fey phrase "Born in the dawn... to pass in the twilight," and has a final kiss with Arthur. Shaking, she rides away. Meanwhile, Merlin is brought before King Uther. He asks what Uther's intentions are. He collapses from his wound and Uther asks who it is that has done this to him. Merlin tells him that it was only a a fisherman, saying he expected to find him in better spirits on the eve of his greatest victory. He tells Uther that he's proud of him, which seems to gratify Uther. Uther is also surprised to learn that Merlin knew the truth about Lady Lunete. Merlin asks if Uther will keep his word and he replies that he needs his rest, then one of Uther's soldiers stabs Merlin through the back. They drag him away to a tent, badly wounded but still alive.

Arthur and the Fey arrive at the coast, where they see approaching ships and are delighted that Uther has apparently kept his word. Meanwhile, Nimue rests in a lonely room when she hears a disturbance. Sister Iris stalks in the shadows, hoping to kill her, but is interrupted when Nimue takes a messenger, who delivers a note from Arthur - "Pendragon ships are here. Boarding now." She rides out to meet with Uther. Meanwhile, Morgana meets with the ghost of Celia. She tells Celia that she doesn't know what to believe anymore and Celia tells her to believe her eyes, that to see death is a gift for them both. Celia tells her that she feels ashamed for doubting her and standing in her way. Morgana says that she never did, but Celia says that she knew her destiny and is on her path. She tells Morgana that she knows she cares for Nimue, but this is where Nimue's journey ends. She warns her not to confront the Widow, that she's not of this world.

Nimue arrives for her meeting with Uther. Uther is livid to discover that Nimue does not have the sword. Nimue tells him that she will have her sword only if Gawain and Squirrel are returned to her alive. Father Carden says that she mocks his kindness and pleads to have Nimue turned over to him. She tells Carden that he can skin her to the bones and she'll never tell him where the Sword of Power is. Uther declares that she has nerve and orders her taken away until he can decide what to do. Meanwhile, Morgana sneaks into the camp, only to be confronted by the Widow, who says that she warned her and starts choking her again. At the shore, the Fey boarding the boats are suddenly attacked by arrows. It's the army of Cumber the Ice King. Arthur declares that he and his men will hold them off so the others can get away. They are joined in their pitched battle by the Red Spear and her forces. Father Carden, fed up, reports to Eydis, saying that the Church looks forward to its partnership with the Ice King. She says that they agreed to allow him to have the witch in exchange for the sword, but she came empty-handed. He tells her that Uther indulges her, but a few hours with them and she'll spill her secrets. The battle continues at a fevered pace, with the Red Spear killing Eydis's sister Dagmar and warning her that Eydis is next.

In the tent of the torturer Brother Salt, Squirrel is chained up. Salt prepares to go to work on him, but Squirrel shows no fear, shouting torrents of insults at him. Then, the Monk enters the tent. Salt asks if he has come to watch, but the Monk severs Salt's head, then breaks the chains binding Squirrel and leads him away. In her tent, Nimue is brooding when a couple of Uther's soldiers enter. One of them tosses Gawain's body at her feet, declaring "Here's the sack of shit you ordered!" Nimue sobs over his body, then rage overwhelms her. Calling upon the power of the Hidden, she releases a blast of magical energy which reverberates throughout the camp, knocking many soldiers off their feet and lighting fires. As the Monk tries to flee, he is confronted by Abbott Wicklow and the Trinity Guards. Wicklow warns the Monk of the Guards' skill, but he nevertheless raises his swords for the battle.

A couple of Red Paladins enter Nimue's tent to find her drained and prostrate on the ground. Despite her weakness, she uses the power of the Hidden to encase Gawain's body in plants. Outside, the Monk battles and defeats all of the Trinity Guards himself, though his badly wounded in the process. Squirrel drags him up on a horse so that they can flee, while Abbott Wicklow also flees. Nimue is brought before Father Carden, who decides that he's had enough and raises his sword to kill Nimue. Just then, however, a hooded figure appears between the two of them and hands Nimue the Sword of Power. "What are you?" Carden asks and she replies, lifting her hood to reveal Morgana, "I'm the Widow." Nimue then beheads Carden, then talks with Morgana, asking her what's going on. She tells Nimue that she killed the Widow, then became her, and now she can sense who's about to die. It's Merlin. The two race to Merlin's tent and find him badly wounded. He tells them to leave him, wanting to die, but they take him with them.

On the shore, the Red Spear tells Arthur that she owes him a debt for his arrow. Arthur tells her that they're even. Nimue, Morgana and Merlin flee until they reach a stone bridge. There, Merlin collapses. He begs them to leave him, but then they are confronted by Sister Iris. To their shock, she fires arrows, one into Nimue's arm and one into her chest. Nimue falls and drops the Sword of Power. She then falls off the edge of the bridge. Merlin grabs onto her hand, but is unable to hold on and she falls down into the water below. Iris flees as a contingent of Red Paladin forces approaches and Merlin, enrages, takes up the Sword of Power and slays many of them before conjuring a massive storm of lightning to slaughter even more. Elsewhere, on a quiet road, the Weeping Monk asks Squirrel for his name. When Squirrel gives it, the Monk replies that a squirrel is an animal and asks what name he was given. Squirrel replies that he doesn't like that name, but the Monk says that it's still his name. Squirrel then gives the name "Percival" and asks if the Monk has a real name. The Monk tells him that a long time ago, his name was "Lancelot."

In a majestic church, Pope Abel intones that out of the darkness always comes a light. He declares that to smite the Wolf-Blood Witch, God has sent his own avenging angel. He inducts Sister Iris as a member of the Trinity Guards, telling her that they shall accomplish great miracles. As Iris takes the mask of the Trinity Guards, flashes of Nimue bleeding in the water below are shown and her gasping breaths are heard as all fades to black. 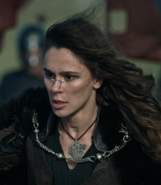